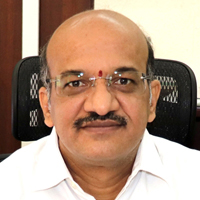 Shri G.T. Venkateshwar Rao, IRS, is currently on deputation with Government of Telangana and is posted as Commissioner (Electronic Service Delivery), Special Commissioner (e-Governance) and Managing Director Telangana State Technology Services in ITE&C department of Government of Telangana. He holds a bachelor’s degree in Mechanical Engineering and two Post Graduate degrees in Industrial management and Computer science. He has held various positions in Income tax department assessment, investigation, intelligence, Systems and was first officer from Income Tax Department to be posted as First Secretary (Economic) in the High Commission of India at Singapore during 2010-13.

He is the first officer from Income Tax Department to receive the coveted Prime Minister award for Excellence in Public Administration in April 2010 which is the highest recognition for civil servants in India for his innovative and path-breaking work in data mining in Income tax department called 360-degree profiling for detecting tax evasion. He worked extensively on Data mining/Data Analytics on Very Large Databases and pioneered the use of data mining in both Electronic Service Delivery department and Income Tax Department. During his tenure as Commissioner, Electronic Service Delivery, department (MeeSeva) has been awarded various national and international awards such as National Awards on e-Governance 2017-18 under ‘Innovations in existing project of Government departments other than PSUs’ category and WITSA chairman’s award at world IT Congress-2018.

Since its inception in 2014, Telangana has been quick to adopt e-Governance through its various initiatives most important being Digital Telangana Initiative. Digital Telangana stands on two pivots and each of them representing the supply and the demand side. On the supply side, the main aim is to ensure that digital facilities become available to each and every person in the state. This is being made possible through:

Outlined below are the different initiatives undertaken under the supply side:

Hyderabad City Wi-Fi Project:
A pilot has been launched to provide Wi-Fi connectivity at 200 public locations with 3 service providers. Over 3000 such locations have been identified and the roll out of Phase 1 covering 1000+ locations has been initiatives and will be completed in the next couple of months.

One Stop Shop/Palle Samagra Seva Kendram/Digital Telangana Centre:
To provide convenience to the citizens in the villages through use of Electronic Platform, Government of Telangana has decided to make available 3 key services i.e Citizen services, Banking Services and Benefit Transfers (Welfare pensions and MNREGA wages) at the Panchayat Level by setting up dedicated centers in the Gram Panchayats. These centers are called Palle Samagra Seva Kendralu or Digital Telangana Centers (PSSK/DTC).

This is first scheme in the country where 3 different services, namely Citizen services, Banking Services and Benefit Transfer services are brought on to single platform.

Similarly, on the demand side, the intention is to make each and every person digitally empowered so that he/she can make best use of the digital facilities that are being made available right at his/her doorstep. The strategies for this include:

Outlined below are the different initiatives undertaken under the demand side:

Telangana 100K Digithon:
A digital literacy program named ‘Telangana Digithon’ has been launched on August 27th 2015 in partnership with Telangana Information Technology Association. In the first phase, the Government has trained 10,000 Digital Leaders and in the next phase in 2017 reached more than 100K citizens across the state.

TS-CLASS:
Under the TS-CLASS program to use ICT in Government schools, there are 4 focus areas:

In first phase the programme is rolled out in about 3000 schools.

Telangana strives to bring all Government services to its citizens on a digital platform called Mee Seva the largest platform in the country. Currently, about 550 different services across 38 departments are provided live on the MeeSeva platform. There are over 4500 MeeSeva centres in the state serving anywhere between 1,00,000 to 1,50,000 citizens every day.

Technology Solutions for all Government Agencies:

Telangana has been taking various initiatives to promote the use of IT among citizens and to use IT solutions to make the lives of citizens easier and Governance smoother. Some of the initiatives are:

Verifast
The primary objective of this project is to ensure that the citizens of the state receive their passports in the shortest possible time by reducing the time taken for police verification of passport applicants. A database of all passport applicants along with the GPS coordinates of the address has also been developed. In addition to this, a green solution has been adopted by eliminating hard copies to the maximum possible extent. As a result Telangana Police is awarded the fastest Passport verification by Ministry of External Affairs Government of India.

RTA M-Wallet
The mobile APP “RTA M-Wallet” has been developed to store the statutory documents like Registration Certificate, Driving License etc., in digital form. The centralized data architecture of Transport Department is utilized to fetch the details of documents on the smart phone. The App helps the Enforcing Authority for identification of document’s genuineness and provided ease to the citizens during checking on the roads. 20 lakh users have downloaded the app which is one of the highest downloaded Government App in the country.

Government of Telangana is a firm believer to use ICT for better citizen service delivery. Telangana has been consistently ranked number 1 in terms of number of e-Transactions per 1000 population as per the information from e taal ( Electronic Transaction Aggregation and Analysis Layer) a portal of Government of India.

E Seva and Mee Seva MeeSeva, being a flagship initiative of Government of Telangana has been a successful and well recognized model for delivery of citizen services electronically not only in Telangana but also in rest of India and World. Currently, about 550 different services across 38 departments are provided live on the MeeSeva platform. There are over 4500 MeeSeva centres in the state serving anywhere between 1,00,000 to 1,50,000 citizens every day.

In addition to initiatives mentioned in the previous question, some of other major e-Governance initiatives.

Telangana records amongst the highest number of per capita e-transactions in India. This is a result of efforts of Telangana government to maximize the use of ICT in delivery of citizen services.

Over the years, Telangana Govt has focussed on ensuring easy access of government services to citizens. Telangana follows a unique model for delivery of citizen services. Using a common platform called MeeSeva, Department of ITE&C brings more than 550 services of 38 departments at a single place which are then subsequently delivered to 35+ Mn population of Telangana using a network of 4500+ MeeSeva centres spread across 31 districts of Telangana. The 4500+ MeeSeva centres provide access to a wide range of G2C, B2C and informational services to every citizen within a 5-10 km reach. 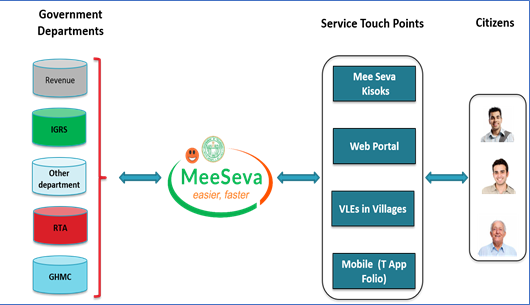 In addition to using established technologies, Telangana has been an early adopter of emerging technologies.